I was stuck. In need of a plot. I had the title, Classic Cashes In, but car detective Jack Colby needed more than that to solve his sixth case. Cashes In? On what? Answer came there none.

Then Jim and I went down to see a friend in Bognor Regis, seen nearest the camera in the photo. Chatting to him, he revealed that in the late 1940s before joining the Royal Navy he had worked for two years as a bank clerk in Hull, where his father was manager at a different branch. Immediately ‘cashes in’ sprang to life. Old Packards sprang after it. Bank robberies followed on. And hey presto, Jack Colby was heading for another case. Classic Cashes In has just been published; Jack’s case, the murder of an enigmatic banking magnate Philip Moxton, is set in the present day, but the Packard he has asked Jack to find for him has an interesting history going way back. Banking in the 1930s and 1940s was far from the world of today, as were its security precautions.

I’ve just finished writing its successor, so once again I’m in need of a plot. Maybe I should set off to Bognor again …. 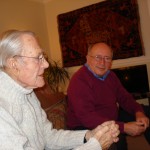